Delbert Davis joined the military wanting to be a helicopter mechanic, but during the physical exam, he discovered he was color blind, disqualifying him from a lot of military jobs. “Becoming a medic was really one of the only choices I had, but it’s a good thing because I ended up really liking it.” Delbert worked on ambulance teams in Korea, Iraq, and the U.S. before being assigned to Tripler Army Medical Center in Hawaii.

What Brought Delbert to CCSF

Delbert reentered civilian life after nine years of service and had to find a new way of supporting his family. He thought about becoming an EMT, but even though he was qualified, “The adrenaline rush was over for me. Iraq kind of burned me out on the blood and guts.” Delbert wanted a new career. The Post-9/11 GI Bill would cover his tuition and living expenses, so he began researching cardiovascular echo technology (CVT/ECHO) programs. CCSF stood out, and Delbert secured one of the 22 spots in CCSF’s highly sought-after CVT/ECHO program.

Delbert also connected with the Veterans Alliance at CCSF. “They helped me out quite a bit with the transition from military life, to not only being a civilian but also a student. I hadn’t been to school since the ‘90s, so it was kind of an adjustment.” The CVT/ECHO program was “pretty intense,” but Delbert enjoyed the college environment and the challenge. “My [Anatomy of Physiology] professor was also a professor at Stanford, and she taught us like she was teaching Stanford students. It was cool: She was tough on us, but I appreciated that.” He had a similarly positive academic experience in English 1C: “[It] was so hard. The instructor made me want to pull my hair out. But the content was good, and it’s made me think about everything I read in a more critical way.”

Why CCSF Was a Good Choice for Delbert

Through the CVT/ECHO clinical internship program, Delbert was able to gain experience at two busy echocardiology departments in the East Bay: Alameda County Medical Center and Alta Bates-Summit Medical Center. After graduating from CCSF, Delbert was hired at the San Francisco VA Medical Center. He performed echocardiograms on fellow veterans. “I spent 30 minutes with people, and some guys told me things they wouldn’t tell their spouses. We just connected.” Delbert later worked at a private cardiology practice, closer to home and with higher pay. His oldest child even followed his footsteps in applying for the CVT/ECHO program at CCSF. 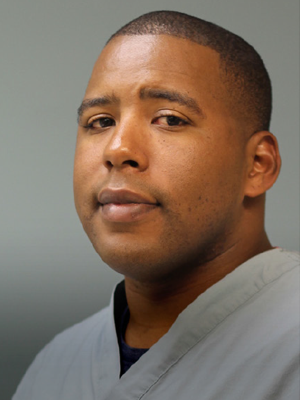 “I was reassigned to Tripler Army Medical Center in Hawaii, where I was introduced to echocardiograms. I assisted on my first cardiac ultrasound and thought maybe I could do this when I get out.”
– Delbert Davis
Health and Safety
Back