Shervey Kong was born and raised in San Francisco. He attended San Francisco State University and graduated with a degree in business administration. After working as an independent contractor managing clinical data, he knew he wanted something different for his life.

What Brought Shervey to CCSF

“What motivated me was that when I graduated in 2010 from San Francisco State, there weren't many opportunities out there. Businesses weren’t hiring; the economy was kinda slow. I just wanted to find another career path.” He noticed there was a lot of talk about a construction boom in the city, and Shervey wanted to be a part of that growth. He started taking non-credit classes at the CCSF Mission Campus.

The classes were offered by the Construction Administration & Professional Services Academy (CAPSA), an 18-week program at Mission Hiring Hall. During the CAPSA program, Shervey already was involved with his current employer through working internship opportunities. After completing the CAPSA program, Shervey enrolled in the construction management program at CCSF to finish his certificate and started taking night classes. He was able to work and go to school: “I got hired on as a project engineer after completing the certificate.” Today, he is a senior project engineer and hopes to be a project manager running his own site someday soon.

Why CCSF Was a Good Choice for Shervey

He appreciated CCSF’s understanding and patience with handling students who were working and going to school. “I think it was a good choice because of the flexibility in the class schedule. It allowed you to work by day and take classes at night. The professors and instructors kept every subject entertaining.” Being able to work while he was in school gave Shervey opportunities to see his classes play out in real time on the project sites. “I was experiencing it daily out here in my project, while learning it simultaneously in class.” 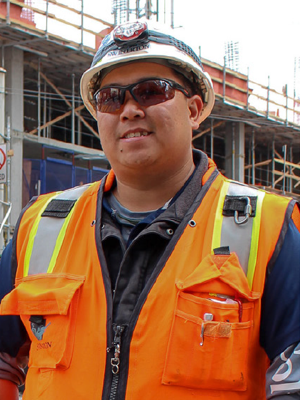 “Every CCSF teacher had their own unique way of teaching the class to make it interesting for everyone. I think they did a great job in keeping the courses interesting.”
– Shervey Kong
Back