Norma Ruiz was raised by a single mother in the Mission, and as a teenager, she got involved with gangs. “I started doing drugs and fighting. You know, everything that comes along with that chaotic lifestyle.” Norma was 14 years old the first time she was arrested, and from then on it was “a revolving door of doing drugs, being arrested, and having felonies on my record, again and again.” The vicious cycle lasted 16 years.

What Brought Norma to CCSF

Everything changed for Norma at Five Keys, the nation’s first charter school inside a county jail. The curriculum was tailored to help incarcerated students succeed. “The teachers were really great, but also I think it was the right time.” Norma had two young kids and was ready to make a change. When she was released, she enrolled in an outpatient program and got a job at a hospitality house, connecting homeless people with services. Norma wanted to pursue a career in community health. She enrolled in the Metro Transfer Academy at CCSF, a special program designed for lowincome, historically underrepresented students looking to pursue meaningful careers in their community.

Being a Metro Transfer student, Norma had extra support and a cohort of fellow students. She also took advantage of resources within CCSF: Way Pass for formerly incarcerated women, HARTS for homeless and at-risk students, and the Child Development Center for her youngest son’s childcare. It was overwhelming at first. “After I got my bearings [I realized] I really do like being in this learning environment. I was meeting people that were so different than the friends I had, people that wanted to get ahead. It was new, but it felt good.” Originally Norma planned to get a health worker certificate, but after doing well in class and gaining work experience with the health education department, she thought, “I’m not just going to settle for a certificate. I think I want to do more than that.”

Why CCSF Was a Good Choice for Norma

Norma completed the health worker certificate, an AA in liberal arts, and an AS in health education. “I learned so much at City College— not just the material but also how to think critically. I learned that there was something more out there for me. I had such a good experience.” Norma transferred to San Francisco State University and graduated with a BA in health education. She is already working in the field as a Peer Services Advocate at the Mission Neighborhood Resource Center. “I help folks access showers and access the shelter system. I run a women’s program to educate the women in our community about healthy relationships, housing rights, and social justice.” 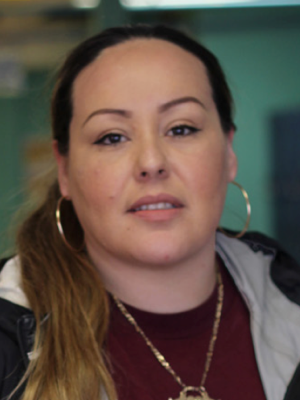 “I understand where a lot of the women I work with are coming from, because I’ve been through it myself. Now, with my experience and education, I’m able to help.”
– Norma Ruiz
Health and Safety
Back