Born and raised in San Francisco, Melissa San Miguel Quintana grew up in the Mission District. She completed her undergraduate degree in political science at UC Berkeley and went on to work as a legislative advocate for kids in foster care and low-income students. “It was very meaningful.” However, it was a ceramics class in Summer 2017 that ultimately would inspire Melissa to make a dramatic switch in her career from political science to art.

What Brought Melissa to CCSF

She found shortly after having this ceramics experience at CCSF— creating something with her hands—the new challenge of selfexpression through art was enough to change the trajectory of her career for good. “What really struck me was how free I felt in art: free to express myself. My thoughts and my ideas on social justice were different than in the political, public-policy world I had been working in.” Compelled to change paths, she soon found herself in the studio arts and art history courses at CCSF. “I found I could communicate in a different way.”

Getting that hands-on experience, focused around creating shows for CCSF students, was incredibly meaningful to Melissa. Making sure shows resonated with the students who have diverse back grounds has been a priority to her in getting to represent that diversity visually. Melissa attributes much of her success to her professors. “I happened to come into an environment where the professors really cared about teaching and learning, and that wasn't always the case with every instructor that I’ve come across.” Through her education, Melissa gained experience as a teaching aid, curated shows for the Rosenberg Library, and worked as a curatorial intern at the San Francisco Museum of Modern Art. She also was accepted into the visiting Diego Rivera Mural Exhibit program at SFMOMA, one of three coveted positions for CCSF students.

Why CCSF Was a Good Choice for Melissa

Spending most of her time now in the art world, Melissa feels she can finally call herself an artist. Just like the amazing women she admires, Toyin Ojih Odutola and Njideka Akunyili Crosby, she can now develop a meaningful body of work of her own. “I feel so fortunate, so absolutely fortunate, that CCSF exists. It has given me the technical training and helped me develop my skills.” With the opportunity to take a chance and change her life path, Melissa has found her true calling through her CCSF experiences. “I believe we are here for such a small amount of time on Earth, and I want to learn as much as I can. I want to push myself as much as I can before I'm not here anymore.” 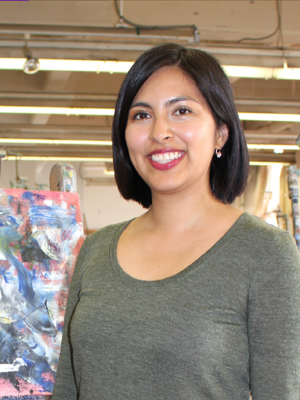 “I believe we are here for such a small amount of time on Earth, and I want to learn as much as I can. I want to push myself as much as I can before I'm not here anymore.”
– Melissa San Miguel Quintana
Arts, Media, and Entertainment
Back