Luis is a graduate of Burton High School in San Francisco. His love of cars stems from years of driving video games. “Sometimes I’d help my dad out with oil changes, stuff like that, but I was never really exposed to a variety of cars. Games showed me all the types of cars that existed and all the ways you could customize them. It fascinated me, and I got curious about how they work.”

What Brought Luis to CCSF

Luis planned to come to CCSF since his junior year of high school. “It was my first choice, because CCSF had a great auto program, but it was also the sure choice for going to college. I was excited about cars, but I wasn’t exactly a straight-A student.” CCSF was also affordable, which was important to Luis and his family.

Starting at CCSF, Luis was a bit intimidated. “Some people in my Intro to Auto Mechanics class had already been working on cars. They came in knowing a lot more than I did.” Before CCSF, Luis would use Google to find out information about how engines worked. “But YouTube videos aren’t nearly as good as actually taking an engine apart like I got to do in class. After a year at CCSF, I knew so much. I knew the names for each part, and I understood the physics and mechanics behind them.” Now Luis is eager to learn more. He is especially looking forward to working with hybrid and electric cars. In his coursework, Luis got to work on lots of different cars and sometimes even brings in his parents’ car. “My parents are really strict about what I can and can’t do, though, so it would be better if I had my own.”

Why CCSF Was a Good Choice for Luis

“I know most of the basics now, and a lot of auto shops are hiring trainees. You’re supposed to still be learning, and if there’s anything that I get stuck on, I can ask my instructors here, and they’ll teach me. When I go to work, I’ll know how to do it.” His long-term goal is to work for his favorite car manufacturer. “Eventually I’d love to work for Nissan, if possible, because I think their cars are very cool. But, really, I just want a job where I get to work on cars every day.” 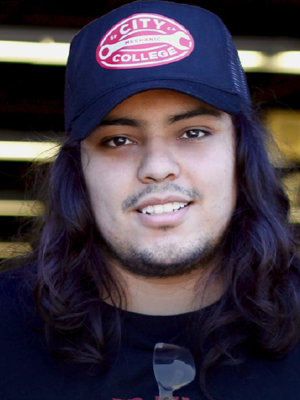 “Sometimes I would help my dad out with oil changes and stuff like that, but I was never really exposed to a variety of cars. Video games showed me all the types of cars that existed and all the ways you could customize and modify them. It fascinated me,
- Luis Estrada
Back