Like many students, Louise Villalta has taken a non-linear path on her educational journey. Born in the Philippines, she has lived in San Francisco for the last 20 years. Initially, Louise wanted to go into interior design but lacked the financial support to pursue that goal. A national recession helped Louise decide to start a nursing program and head toward a career more fully supported by her family.

What Brought Louise to CCSF

Once Louise started her nursing program, her creativity was lost. As someone who loved to design things, this was challenging for Louise. “I love a challenge; I love creating new things, and I wanted something I can keep doing until I die. I wanted something that was everchanging, and I wanted to use my imagination, because I have so much of it.” Meanwhile, her family saw her unhappy and struggling. Louise started taking some architecture classes at CCSF, and her parents got to see the glow those classes brought out in her. “They saw this different turn where I kind of just flew, and they saw the happiness that came along with it.”

During her time in nursing, Louise did gain skills which helped her in her continuing education. She learned time management, how to be rigorous in her studies, and overall how to develop better study habits. “Architecture is all about time management and layers. Instead of doing one whole big thing, I do little small things—which I learned from nursing—to get this one big result.” Thriving in her new discipline, Louise began collaborating with peers on projects and using her educational experiences to gain as much perspective and knowledge as she could. Studio classes are her favorite: getting her hands on projects and showing her abundant creativity continues to excite Louise. “After I got into CCSF, finding out who my teachers were and how they motivated me ... I knew I was in a great place.”

Why CCSF Was a Good Choice for Louise

In addition to the proximity of CCSF, Louise was able to take advantage of the Free City program for San Francisco residents. She discovered CCSF’s leading architecture program and its close relationship with UC Berkeley for ideal transfer opportunities. In the future, Louise dreams of designing a nursing home, something utilizing and bringing aspects of nature into patients’ lives. “I would love to use organic architecture and make it so seamless, bringing outside in and inside out.” 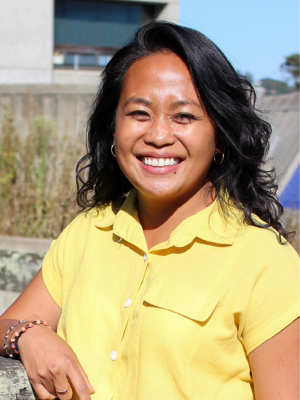