Jung Fitzpatrick fell in love with making pictures while living abroad in Ecuador and Korea. She even considered a career in photography when she got back home to the United States. “But, by then, I already had my bachelor’s degree. I had a bunch of student debt.” Her holiday was over. The first dot-com bubble had burst and finding work was hard enough. Jung could not fathom going back to school. “At that point, I’d been considering photojournalism. I think people that go into journalism are idealistic in some way. They want to make the world a better place, so I channeled that into non-profit work, and I did that for about 15 years.”

What brought Jung to CCSF

Jung excelled in the non-profit world. “I was at a point in my career where I was making more money than I ever had, but I still wasn’t fulfilled, and I thought, ‘Photography is something that’s always been in the background, and if I don’t give it a go, I’m going to regret it.’” Jung spoke to Bay Area photographers and asked for advice. “They all were like, ‘CCSF has a great program, really affordable, great teachers.’” Jung already had two degrees, but she just wanted training, and CCSF sounded ideal. She quit her job and enrolled.

Jung threw herself into photography at CCSF. “I pushed myself, because I figured this is my new life. I’m not just here for fun, so I got a lot out of the classes.” A guest-lecture class was particularly valuable for Jung, as she met Sue Tallon. Like Jung, Tallon was originally interested in photojournalism but eventually moved into commercial work, creating colorful hyper-real images of food. “I loved the way she presented herself and talked about her work. I must have asked her at least 20 questions after the presentation.” Inspired, Jung took every studio lighting class CCSF had to offer, and after a year, felt confident looking for work as a photo assistant. Her first email was to Tallon, who wrote back immediately and hired Jung a month later.

Why CCSF was a good choice for Jung

Now Jung manages Tallon’s studio, and she is establishing herself as a photographer in her own right. “There’s no way I could be taken seriously as a photographer, especially a commercial photographer, if I didn’t have that [CCSF] training.” Jung has done editorial work for the East Bay Express and is building a portfolio of pet portraiture. “I’m very proud of my work, so there’s a sense of accomplishment but also a sense it could be better.” She says she is still figuring out how to make a living and market herself, still trying to find her niche. “I’m really pushing myself all the time. I keep raising the bar ... I am definitely much more fulfilled.” 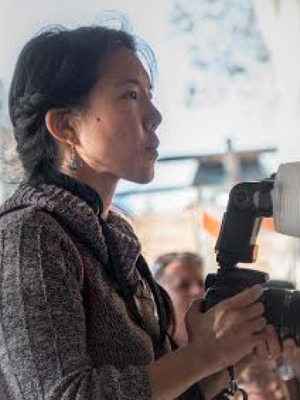 “I was at a point in my career where I was making more money than I ever had, but I still wasn’t fulfilled, and I thought, ‘Photography is something that’s always been in the background, and if I don’t give it a go, I’m going to regret it.’”
– Jung Fitzpatrick
Arts, Media, and Entertainment
Back