Josie Hao was born and raised in San Francisco. Her family owned a tropical fish store, and she had a lot of pets. After school, Josie volunteered at an animal shelter and dreamed of one day becoming a veterinarian. She told a supervisor at the shelter about her career plans: “He told me I wouldn’t be able [to do it], that I wasn’t cut out to be a vet. That really affected me, and I started to doubt myself. I didn’t think I was smart enough for a science major, so I shorted myself and ended up majoring in psychology at UC Santa Cruz.”

What Brought Josie to CCSF

Josie came back to San Francisco after graduating from UCSC, and feeling aimless, she took a job at a shoe shop to pay her student loans. She discovered CCSF’s pharmacy technician program while hanging out at CCSF with friends who were students. “Pharmacology was the most scientific aspect of my psychology major. I’d really enjoyed learning how different drugs affect the body, and I thought it would be cool to learn more.”

CCSF was very different than UCSC for Josie. “It was more diverse. The classes were smaller, too. It felt intimate.” Josie liked that the instructors knew her. “I became close with a lot of my instructors; some even asked me to be a teaching assistant.” Josie excelled academically, too. “I took the state pharmacy technician exam after my first semester just to see what it was like, but I passed it. I still wanted to complete CCSF’s pharmacy tech program, but it was nice to know I was on the right track.” In her second semester, Josie had the opportunity to intern with Kaiser.

Why CCSF Was a Good Choice for Josie

When Josie graduated, she was not sure what she should do, because she could not see herself working at a pharmacy. Browsing Craigslist, Josie came across an ad that piqued her interest. All Pets Hospital was looking for a receptionist. “I applied, interviewed, and was hired the same day. The hospital manager was attracted to the pharm tech aspect of my résumé.” All the receptionists were trained to dispense medicine, but because of her training at CCSF, Josie was able to jump right in. She could read the doctor’s illegible handwriting, knew all the prescription codes, and before long she was training people. Now, two years later, Josie is the hospital manager. “It’s all come full circle, and I’m in a pretty good place. I’m constantly learning. I get to manage other people and make important decisions, and I get to work with animals.” 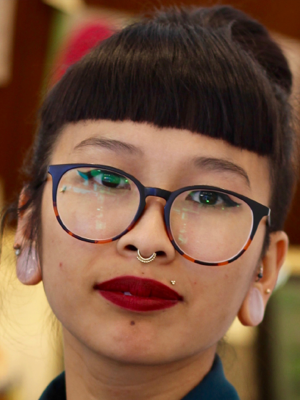 “Pharmacology was the most scientific aspect of my psychology major. I’d really enjoyed learning how different drugs affect the body, and I thought it’d be cool to learn more.”
– Josie Hoa
Health and Safety
Back