Jessica was born in San Francisco. Her family moved to Hayward and then to Oakland years later. She thinks of herself as a bit of an introvert and loves gaming, especially the PlayStation game Kingdom Hearts. She has been a part of the Anime and Manga Club and the Video Game Club at CCSF, although both were later disbanded because it was hard finding someone who would step forward as the leader—mainly, Jessica explains, because introverts do not like to be leaders.

What Brought Jessica to CCSF

Initially, Jessica went to the broadcasting department for their audio production program. “Originally, I went for music, specifically for music theory.” The music teacher introduced her to broadcasting, and Jessica decided that it was a good chance to broaden her horizons and learn to record her own music. “I feel like music theory really helps sound designers, or audio engineers in general, learn about what their musicians are playing. If they are able to speak their language, then they are able to communicate effectively.”

Jessica loves to record and make her own beats. “I absolutely fell in love with broadcasting.” During her time in the broadcasting department, she worked on “We Are Gamers”—examining the subtle complexities of gamers and their habits. Although she struggled to give directions to others, she admits she learned a lot from the experience and found it gave her more confidence. The connections Jessica made through CCSF extended to many networking opportunities. Her professors seemed to know everyone in the business, and through a series of studio visits and well-placed assignments, she grew the confidence to turn those encounters into her own connections. “The faculty will give you the resources to help. Of course, they’re not going to hold your hand or anything.”

Why CCSF Was a Good Choice for Jessica

Jessica is most excited about her new project: working to get a podcast off the ground for the Bayview Opera House. Her confidence is palpable as she explains that this project is going to get up and running. “CCSF pretty much helped me come out of my shell. It made me a little bit more assertive ... a lot more assertive.” Beyond the network of people Jessica met, none were more impactful on her self-confidence than her peers within her program at CCSF. They shared common interests, and class time gave way to collaborations and true friendships. 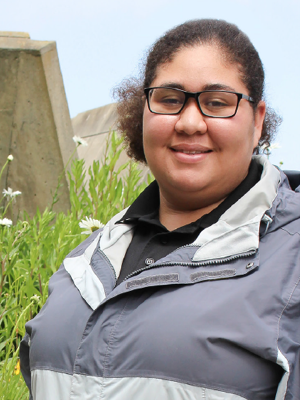 “With CCSF, I found not only myself but the thing I really loved most, which is recording. I absolutely fell in love with broadcasting.”
– Jessica Baker
Arts, Media, and Entertainment
Back