Erica Calegari is from a small town called Bergenfield in northern New Jersey. Growing up, she was a mischievous kid. Erica loved playing outside with her twin sister, but they were often grounded. “Whenever we were stuck indoors, I loved to draw.” She would also leaf through home design magazines with her mom. “We’d look at layouts, and I’d draw up ‘plans’ for homes with these elaborate kitchens.” That love for design led Erica to study architecture for a while in Boston, until family circumstances required her to leave school and relocate.

What Brought Erica to CCSF

A few years later, Erica was married and living in New York. She had some friends that were freelance graphic designers. What interested her about graphic design was the somewhat-immediate, final-design output. “With architecture, it’s not really complete until the building is built.” Erica was considering going back to school for graphic design when her husband was offered a job in San Francisco. As a result, Erica began researching colleges out here. “I landed on CCSF, because their visual media design [VMD] program was the most practical and project-based.”

Erica was in San Francisco for a year before enrolling at CCSF. She wanted to establish residency to qualify for more affordable, in-state tuition. “It wasn’t easy settling in to a new city, especially because I didn’t have the skills to get the job I wanted.” The VMD program is focused around real projects for real clients, and most of the work is within CCSF itself. “The fashion department had us create a poster for the Spring Fashion Show. I’ve done work for the culinary department, too. I designed the invitation and program for the annual fundraiser, and I’m on a team that’s developing their new logo.” This semester Erica also designed a website for an outside client, SF POM, a San Francisco-based support network for parents of multiples.

Why CCSF Was a Good Choice for Erica

Erica already has built an impressive portfolio. She’s not worried about finding work. “San Francisco is a mecca for graphic design, but I don’t necessarily want to go into marketing or work for an agency.” Ideally, Erica wants to do graphic design work for social and political causes. She knows that might mean going the freelance route. “You constantly have to sell yourself, and you need to be good at presenting and taking feedback, but the VMD program prepares you for that.” The freedom that comes with freelancing also appeals to Erica. “One of my other passions is travel, so I like the idea of being able to make my own schedule and work from anywhere.” 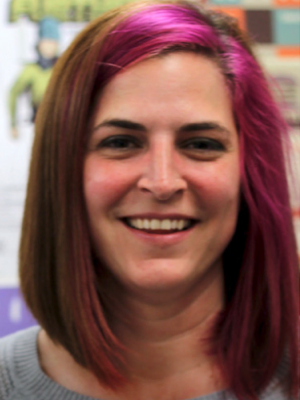 "Once I started at CCSF, everything blossomed. Meeting so many new people, jumping straight into design projects, and just learning in general, it felt like my world was expanding."
– Erica Calegari
Arts, Media, and Entertainment
Back