Some people like painting or soccer, while Danny Mou enjoys creating and inventing ways to make window blinds automatic. “I’m trying to automate a lot of stuff in my house right now.” He completed a computer science degree, but when Danny looked around, most of the jobs being offered were in San Jose. He wanted to find work in San Francisco. “I looked toward more community-focused resources.”

What Brought Danny to CCSF

Originally, Danny was looking for something else related to computers and found the Computer Networking and Information Technology (CNIT) department at CCSF. “I fell in love with the security field and just went from there.” Besides hoping to stay in San Francisco, Danny’s main focus was furthering his knowledge of computer science. “It was a lot of self-motivation really. I already was invested in computers, but I never learned how to code securely. It was a very big field that I didn’t know was an integral part of coding. You can’t do it without knowing about it.”

As a member of the cybersecurity team at CCSF, Danny and another student designed a website for the group. They also received a grant from the Department of Defense to work on cyber securityrelated projects. “We were [able] to expose the students to people in the industry and to get them the jobs skills they need to move forward in their careers.” Danny is not as concerned with exactly what type of work he will be doing after school; his main concern is personal growth. “As long as I keep learning and improving myself, that is all that is really important.”

Why CCSF Was a Good Choice for Danny

Danny applied for the coveted 18-month, paid cybersecurity apprenticeship at CCSF. He has been working at a start-up company as a Security Analyst apprentice and has begun helping them create a system to smoothly integrate new people into the company. He’s also excited at the prospect of more remote work he’s being given as the company’s trust in him grows. Of his time at CCSF, Danny says, “I wouldn’t think of going anywhere else. I mean, free education ... I took advantage of that.” 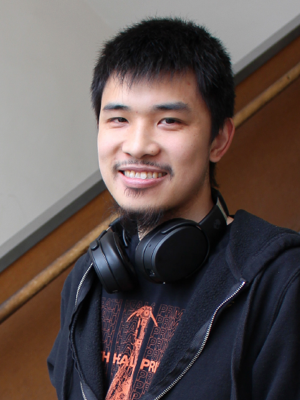 “As long as I keep learning and improving myself, that is all that is really important. I wouldn't think of going anywhere else. I mean, free education ... I took advantage of that.”
– Danny Mou
Back