Daniel Ranum served in the Marine Corps for four years before attending City College of San Francisco. “I'm a little bit of an adrenaline junky.” Daniel enjoys riding motorcycles, playing video games, being outdoors, and going hiking. He also loves hanging out with dogs and going to the beach—any beach, anywhere!

What Brought Daniel to CCSF

Daniel’s sister worked as a physical therapist and knew that Daniel had an interest in the healthcare field, despite having very little direction on where to go or what to do next. “She had worked very closely, being a physical therapist, with many different levels within the hospital, and she suggested nursing.” It turned out to be the right choice for Daniel. “I wanted an experience in hospitals with San Francisco’s population. I felt I’d get a more impactful experience and that has been true.”

In Daniel’s program, he did clinicals at General Hospital two days a week, where a student follows a nurse around and assists in any care needed by patients that day. The clinicals last for the first three semesters and are meant to give experience to students at varying levels within the hospital. In the beginning, Daniel told himself that pediatrics was the last place he wanted to be, but after a single day of class, he changed his mind and found himself being drawn to the children. “I was in the pediatric oncology unit. It was really the strength of the children, their ability to overcome the adversity, that was absolutely amazing.”

Why CCSF Was a Good Choice for Daniel

When Daniel finishes his program, he will take his licensure exam and apply to all the local hospitals with the hopes of being accepted at General Hospital. “It's not really the grades. It’s being able to feel confident in a workplace. The grades are here or there, but I wanted to feel comfortable and understand everything I'm doing rather than just taking it in and regurgitating it.” 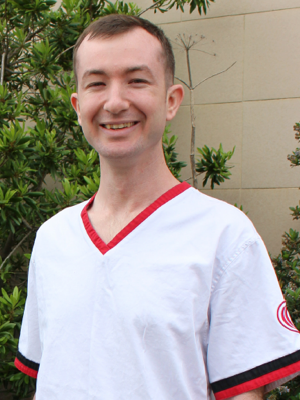 “I like seeing the way the patients look at you for your expertise and how they rely on you for help ... the gratification you get out of it from being able to care or empathize or help people. It's really a rewarding experience.”
– Daniel Ranum
Back