After coming to the United States from Vietnam, Bryan Ly’s parents settled in Michigan. They later divorced, and Bryan’s father moved to San Francisco. He was never particularly good at school but loved sports and was on the football team in high school. Bryan tried community college in Michigan for a couple semesters, but when his mother became sick, he dropped out to take better care of her. Even before this, his grades were poor, and he never really took school seriously. A long break from school did not inspire confidence from his family and friends when Bryan decided to return to his education. “I had a lot of people doubting me. I feel like I wanted to prove them wrong.”

What Brought Bryan to CCSF

When his mother was in good health again, Bryan made plans to move to San Francisco. As he looked at his life moving across the country, he knew this was his moment to seize his opportunity to get serious with school and make a life for himself and his family. His brother had graduated from CCSF and then later from San Francisco State University; seeing this educational success for the first time in his family gave Bryan confidence it could be done. He moved, began classes, and got a job working as an accounting clerk. “Knowing I wanted to become an accountant is when I realized I needed to take school seriously.”

Bryan had struggled with school at multiple levels in Michigan. But after defining his educational goals, and with the support and encouragement he received from his teachers at CCSF, he was able to change that. “I think my professors here are actually the reason why I've been getting the straight As.” Bryan recognizes it is all in the small things the CCSF faculty offer students: accessibility, encouragement, and office hour visits, all while being kind, personable, and caring. “They actually want to see you succeed.”

Why CCSF Was a Good Choice for Bryan

While going to school full time and working part time about one or two days a week, Bryan is on track to graduate and then transfer for two more years at a four-year campus. Above all else, his end goal is passing the Uniform Certified Public Accountant Examination. “It's like an investment. You’re investing in yourself. A lot of people will go to a casino and gamble all their money away. But I look at it as I’m taking that same exact money I could gamble away, and I’m investing it in myself.” 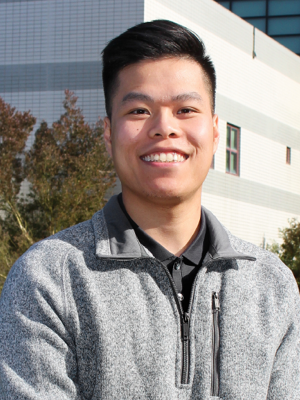 “It's like an investment. You're investing in yourself. A lot of people will go to a casino and gamble all their money away. But I look at it as I'm taking that same exact money I could gamble away, and I'm investing it in myself.”
– Bryan Ly
Business, Management, and Entrepreneurship
Back