Despite being born in San Francisco, Ayesha Chattopadhyay grew up in Singapore. In secondary school there, Ayesha struggled to make good grades. “I was so scared I was going to be held back a year. I was getting Ds and Fs, except in art.” Specifically, math class made her feel horrible and as though she didn’t know anything. But Ayesha dedicated herself to learn and study hard, and slowly she improved. “After that, I started getting one of the top scores. I worked really hard for that.” On a final exam, she earned an A in math. “That was when I started feeling a sense of achievement. I started understanding hard work actually produces something.”

What Brought Ayesha to CCSF

Ayesha’s parents had moved the family from San Francisco to Singapore when she was very young, but college was expensive in Singapore. Ayesha decided to enroll for college in San Francisco. Her family was very familiar with CCSF, and her older sister had attended a couple years before Ayesha chose to come back to the city. But her new life was not without tribulation. “Moving to a completely different new place in a different country, I felt really, really lonely at the start.”

One thing Ayesha understood very early on was that if she was going to go to school this time around, she needed to treat it as though it were her top priority. She put in many hours of study time and even started working as a teaching assistant doing grading for one of her classes a few hours a week. Ayesha also joined Alpha Gamma Sigma on campus, eventually becoming an officer. The experience of volunteering, planting trees in San Francisco, and comradery with the other students helped her meet people and make connections. “That club helped me get close to a lot of people because you get to work on a team.”

Why CCSF Was a Good Choice for Ayesha

Ayesha is transferring to UC Berkeley to study computer science. “My big dream is I don’t want my mom to work anymore. Also, I want to do things I love and enjoy.” But beyond good grades and making money, Ayesha’s primary goal is similar to a lot of others. “I always feel like I want to be happy. And I don’t know what will make me happy in the future, but I’m just doing what is making me happy now.” 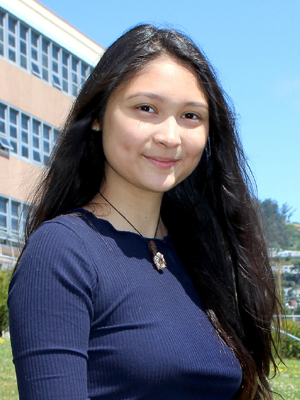 “I always feel like I want to be happy. And I don't know what will make me happy in the future, but I'm just doing what is making me happy now.”
– Ayesha Chattopadhyay
Back