The Cinema Department is ideally situated in the San Francisco Bay Area, which is home to one of the country's most vibrant film cultures and traditions. Our program is unique in the breadth of its course offerings, the quality of its instruction, and the accessibility of its equipment. As part of one of the largest, most diverse community colleges in the country, the Cinema Department is an exciting and rewarding place to study film.

The Cinema Department is equipped to fulfill a wide range of professional and academic goals. Our production and studies classes include: basic film production, narrative filmmaking, directing, cinematography and lighting, screenwriting, producing, digital editing, sound for motion pictures, documentary production, film history, film aesthetics, and genre/auteur studies. Students work with state-of-the-art equipment in classes that emphasize hands-on training and portfolio production. Film studies courses analyze the history, aesthetics, and culture of cinema. The knowledge and experience acquired in our programs will prepare students for transfer to four-year programs and/or to pursue their goals in the motion picture industry.

The Cinema Department offers two degree options. The Associate in Science Degree in Cinema Production is intended for students who are interested in pursuing a career in film production. The Associate in Arts Degree in Film Studies provides students with critical perspectives on historical and contemporary media forms while preparing them for transfer to film studies programs at four-year colleges and universities.

We offer Certificates of Achievement in Cinema Foundations, Cinematography, Directing, Film Studies, Pre-Production/Producing and Scriptwriting. Each certificate helps students build essential tools to develop skills in their current profession, learn new skills in preparation for a career change, obtain entry-level work in the media industry, thrive in a four-year program, and/or create their own independent projects. 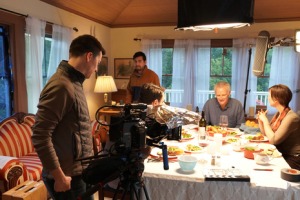 CCSF Cinema Graduate
On the set of Potato, winner of Best Narrative Short at the 2019 City Shorts Film Festival.
Watch the Potato Trailer
Back