Have questions about Physics classes? Read through some of our more frequently asked questions to get your answers!

Frequently Asked Questions
Toggle All
0. What is the Summer 2022 Physics Schedule of Classes? 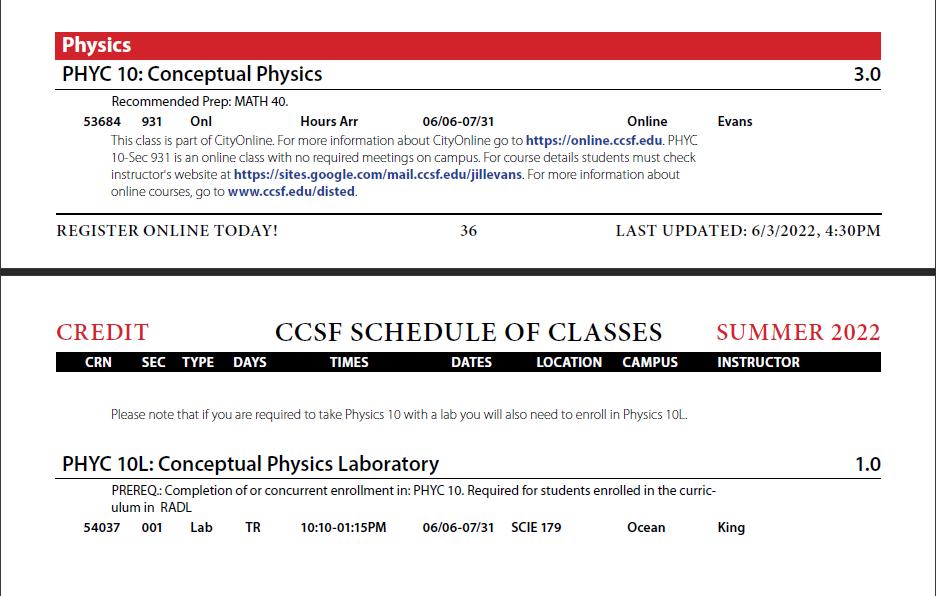 1a. What is the Fall 2022 Physics (with Physical Science) Schedule of Classes? 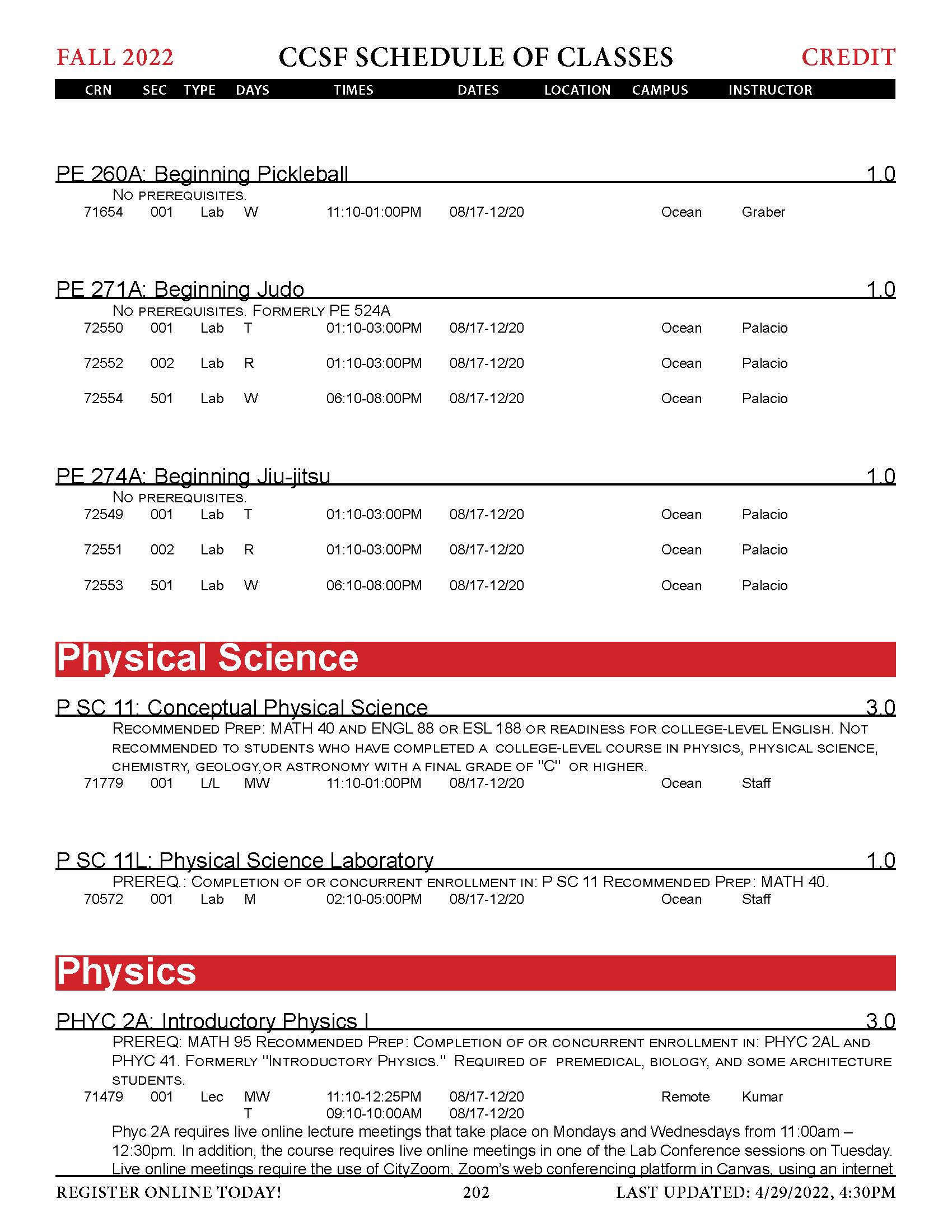 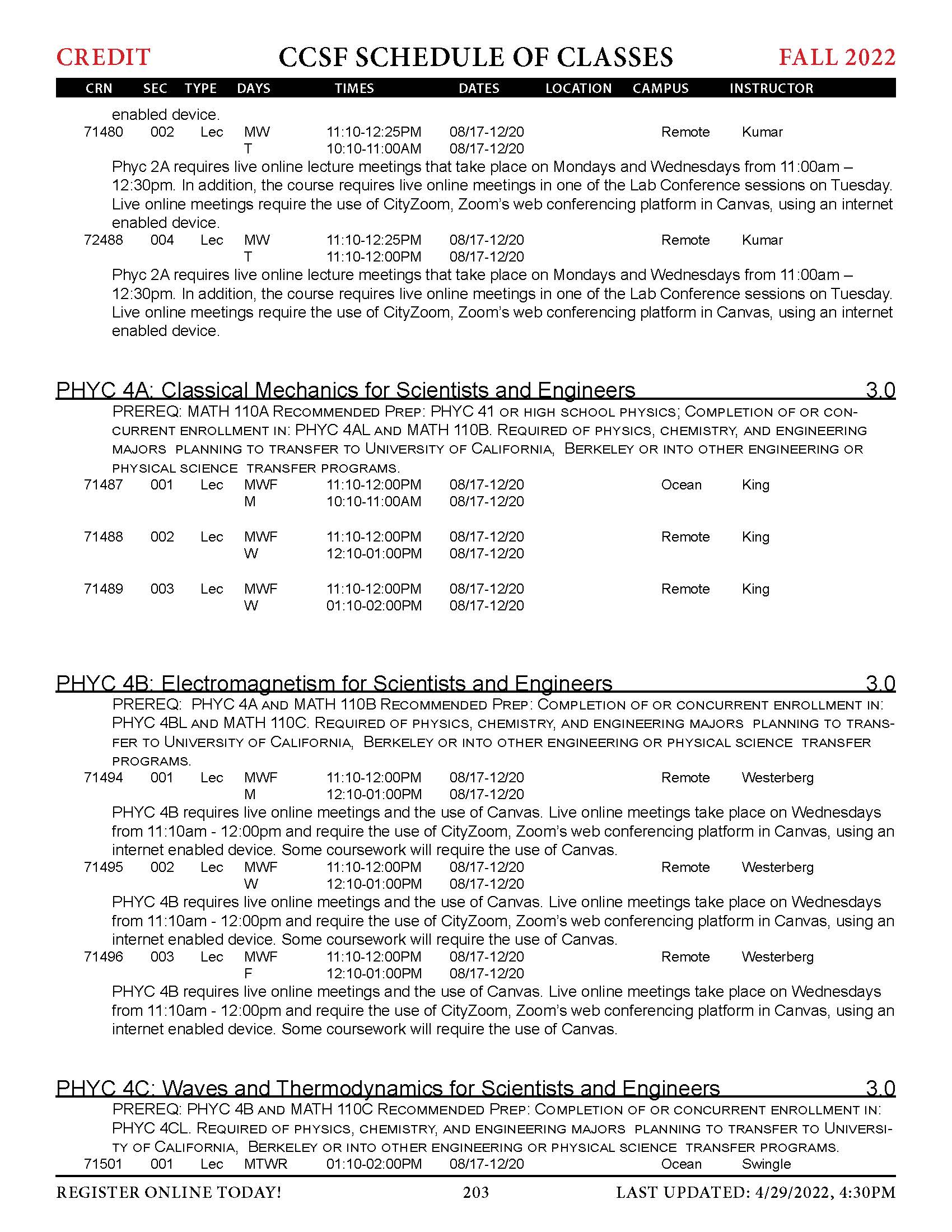 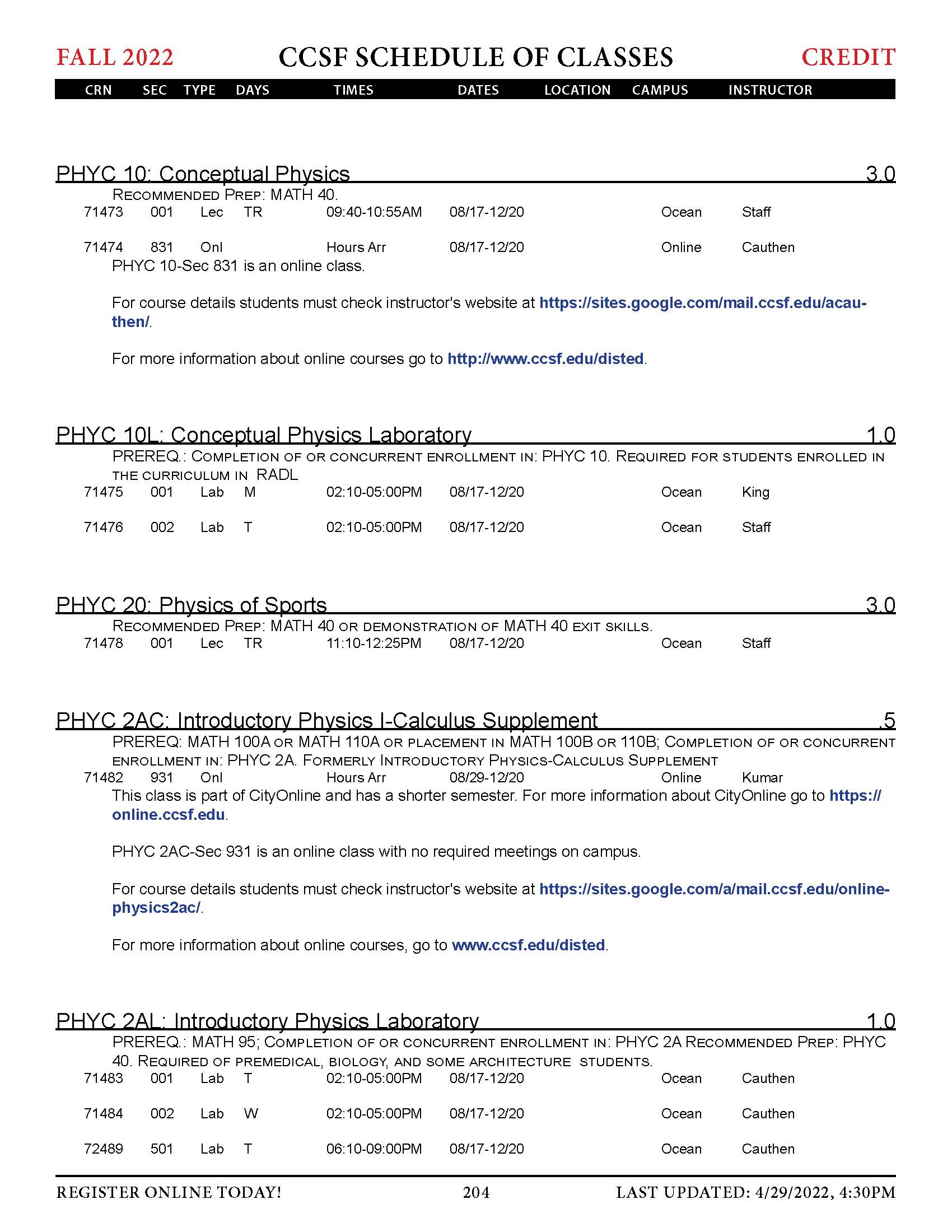 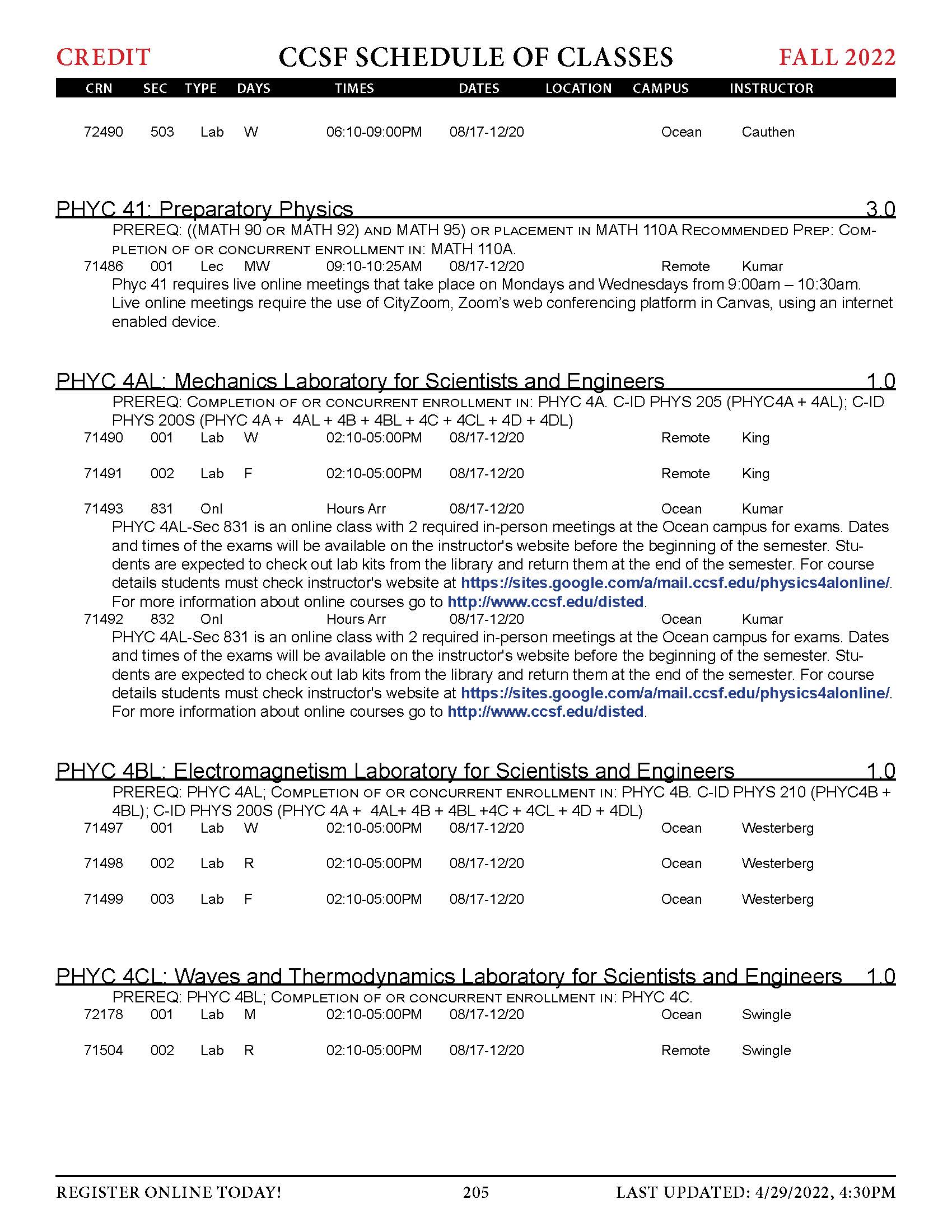 These pages are also available in the Fall 2022 Credit Schedule PDF.

1b. What is the Spring 2022 Physics (with Physical Science) Schedule of Classes? 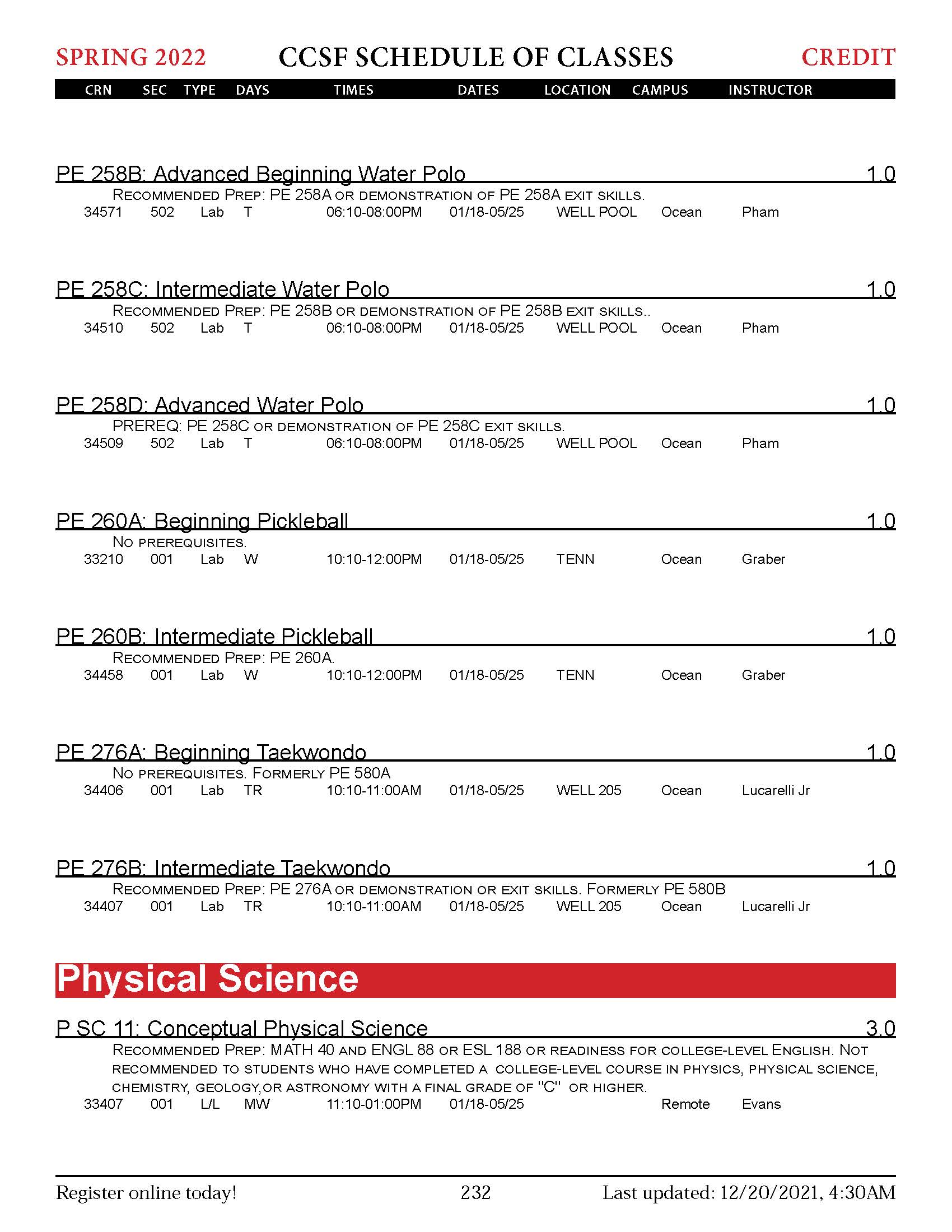 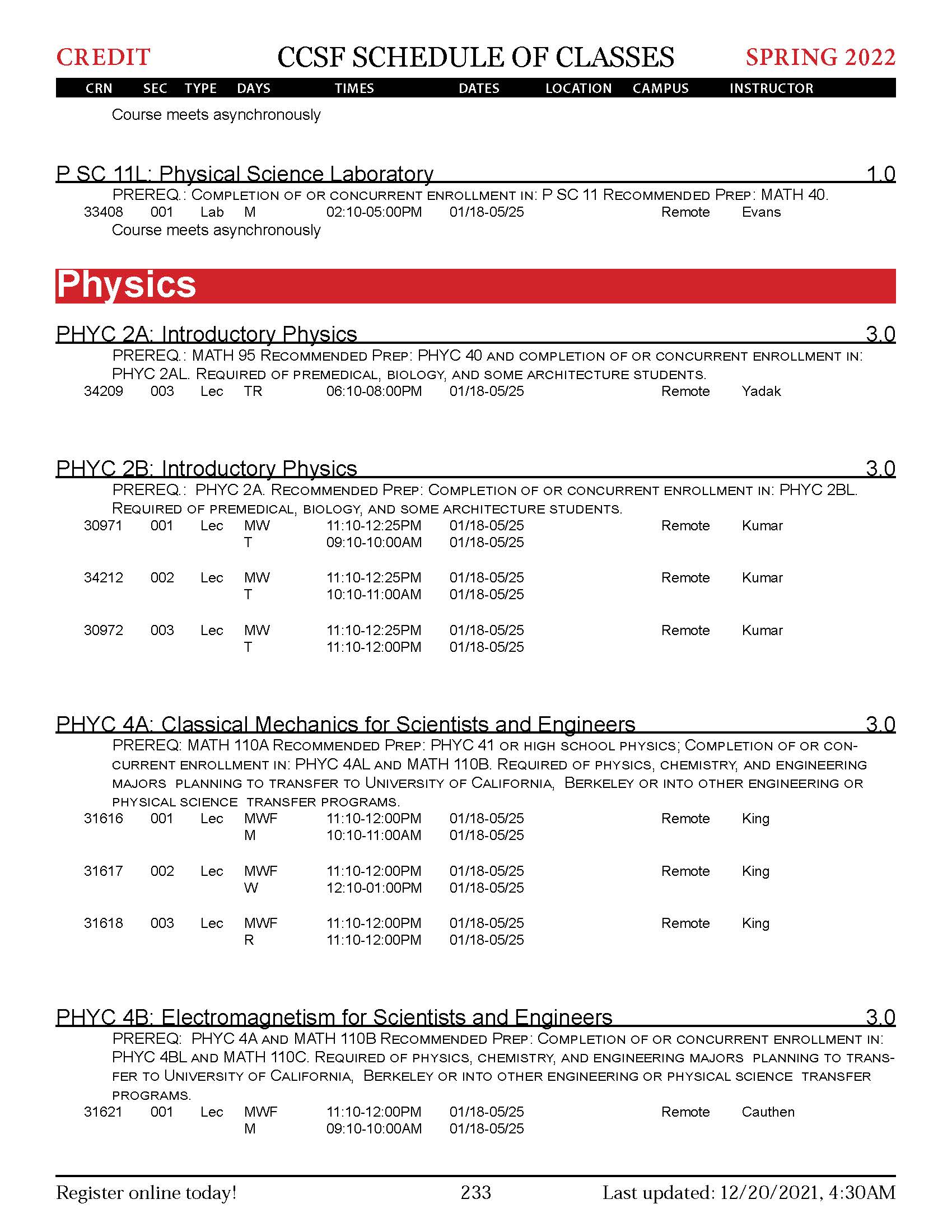 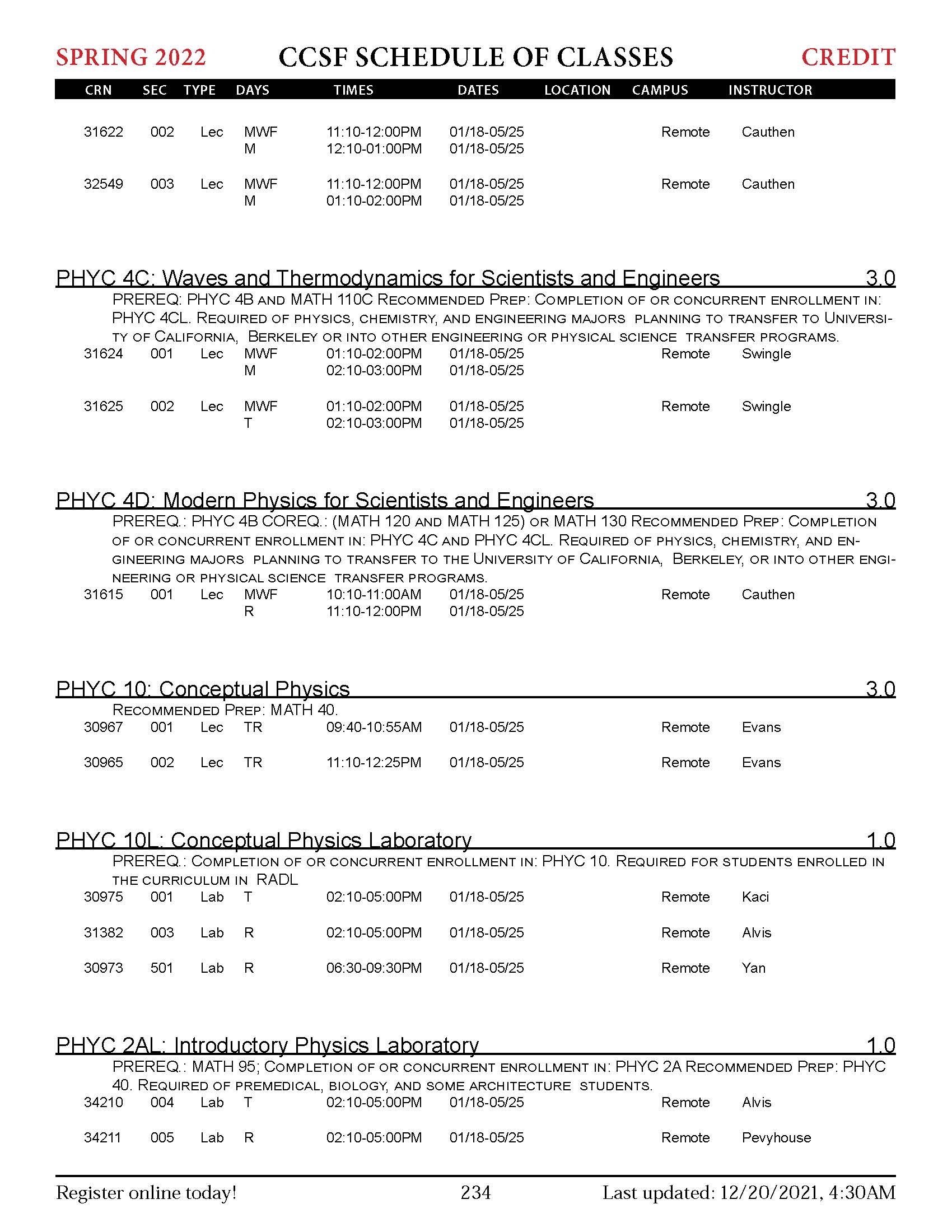 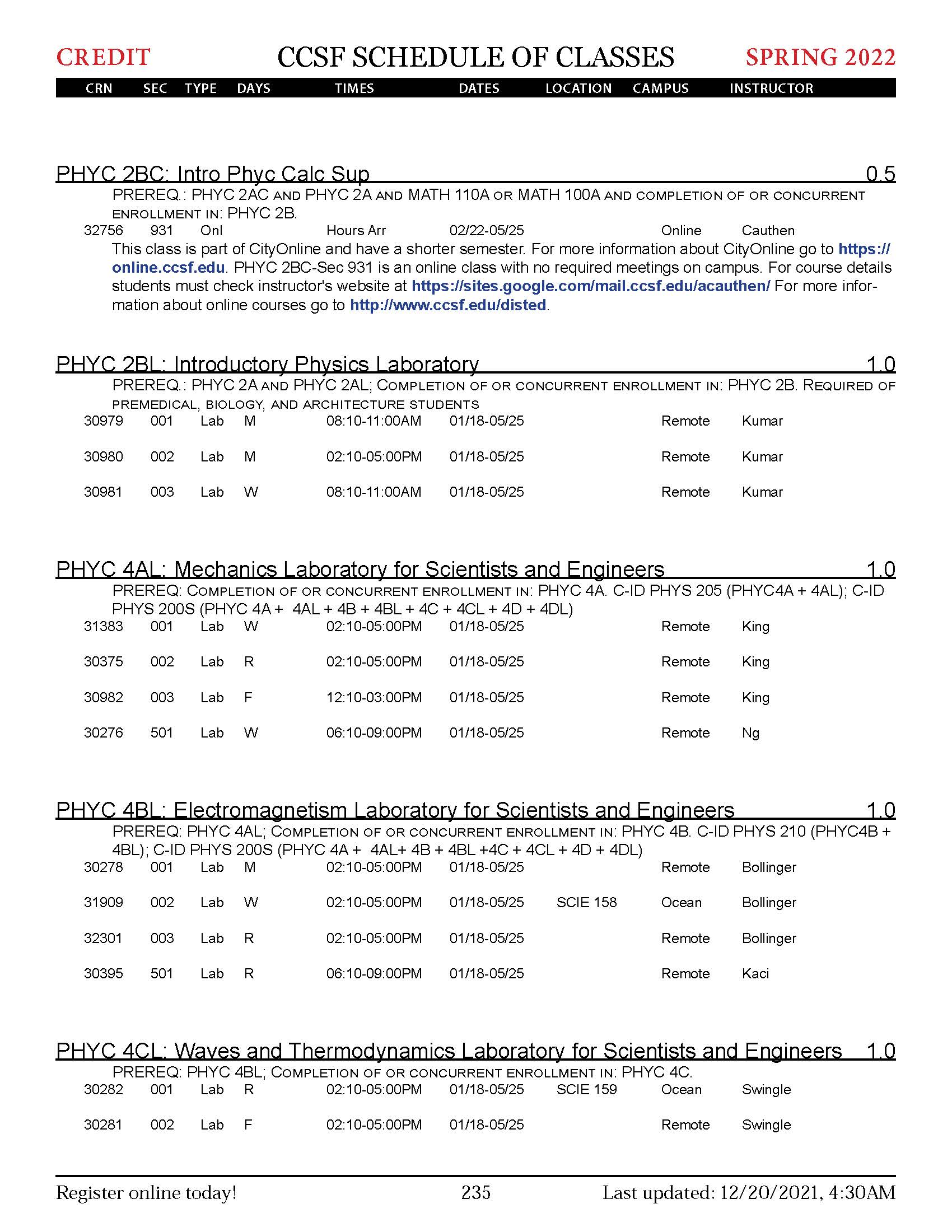 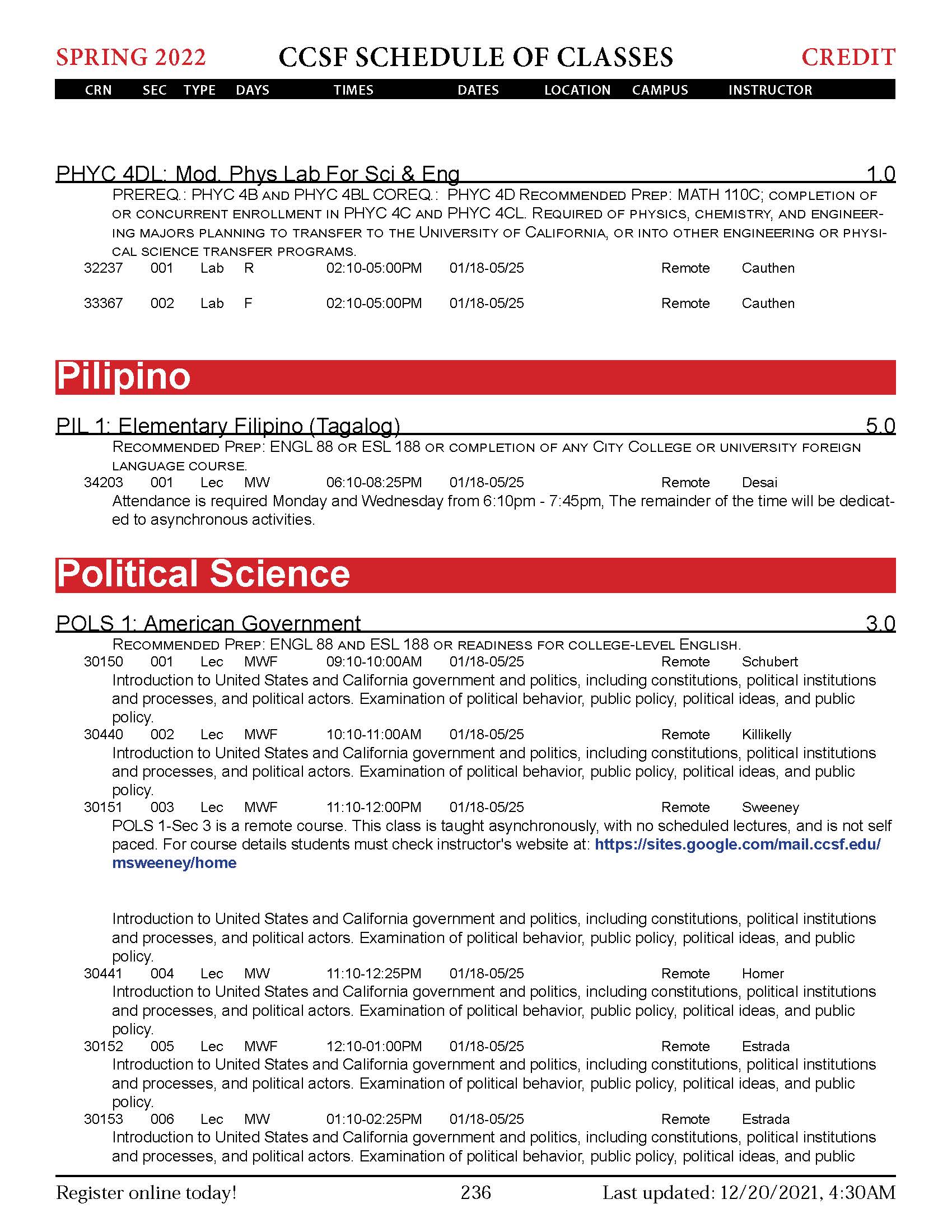 These pages are also available in the Spring 2022 Credit Schedule PDF.

2. What is the most recent listing of CCSF email addresses for members of the Physics Department?

3. How do I get a prerequisite block removed?

If you received a message when you register that states that you have a pre-requisite block and you feel that it is an error, please contact the department chair. This may happen if you have taken a course at a different school and you have not transferred the course to CCSF. If that is the case, send a copy of your transcript, your CCSF student ID number, and the CCSF physics course that you would like to add to the department chair. It can usually be cleared up within a day or two.

4. What is the difference between Physics 10 and Physical Science 11?

Both classes are conceptual introductions to physics or physical science, and emphasize topics that lead to a better understanding of our technological society and physical environment. Both Conceptual Physics and Conceptual Physical Science were developed by Paul Hewitt an emeritus professor of Physics at CCSF. Neither course has a math prerequisite, although ratios and some simple algebra are used, so there is a math advisory attached to each: see catalog for current advisories. Equations are used as guides for thinking and not for "plug and chug" exercises.

Physics 10 and Physical Science 11 lectures may be taken with or without the corresponding lab. Whether you need to take the lab depends on your program of study, and you are strongly encouraged to consult with a counselor to see whether you need to take the lab. Generally, for an associates degree at CCSF you only need the lecture to satisfy GE area C, but some specific programs such as Diagnostic Medical Imaging require the lab as well. The California State University System and the University of California system generally require at least one science class with a lab. This may be satisfied by taking Physics 10 lecture and lab (PHYC 10 and 10L), or Physical Science 11 lecture and lab. You may enroll in PHYC 10L or P SC 11L concurrently with the lecture, or in a subsequent semester.

For the Physics 4 and Physics 2 series, lab classes are strongly advised. Nearly all programs that require Physics 2 or 4 also require the lab as well. Furthermore, the labs may be prerequisites for other courses in the sequence. Putting off or skipping the labs for these courses may seriously delay students from completing their programs.

6. Can I take Physics 4C and Physics 4D at the same time?

Strong students may be allowed to take the last two semesters concurrently. The lab class is a co-requisite of its corresponding lecture and a required component for transfer in almost all cases. Contact the department chair if you believe you may be an exception.

The policy for AP tests is in the CCSF Catalog. Currently, a score of 3/4/5 on the Physics 1, 2, C Mechanics, or C Elect. and Magnetism may be used for 3 units towards CCSF GE Area C

For course equivalency please contact the department chair. The reason for the consultation with the department chair is that AP test policy varies widely for different 4-year institutions, and it is possible that students could wind up in a position of having to go back and retake courses.

8. What are some instructive links to physics simulations?

If you have questions or comments regarding any of the Physics Department webpages, please contact Dack Lee at dklee@ccsf.edu .