Architectures of Segregation and Liberation

Race and Place: Architectures of Segregation and Liberation (AoS/AoL), a multidisciplinary project, will explore how racial attitudes shape environments, how environments maintain racial divisions, and how communities can move beyond segregation to racially integrated cities, where quality housing, education, and health and social services are accessible to all members of the community.

The main focus of the project is an installation that will combine artifacts, photographs, and artwork in a striking spatial configuration to educate the public on intersections of race and place in the United States. The exhibit will spark dialogue on how this knowledge can be used to rebuild our communities.

City College of San Francisco’s GROUNDSWELL program will install AoS/AoL at the CCSF Fourth and Mission street level site, one of the busiest intersections in the city. Several small exhibits in an interlocking, multidimensional design will connect to people on the street, while giving visitors to the installation the opportunity to participate in conversation and debate.

Drawings and photographs contrasting slave quarters and overseers’ houses
Back of the Big House: The Architecture of Plantation Slavery by John Michael Vlach
(Chapel Hill: University of North Carolina Press, 1993)

Triptych painting by San Francisco artist and muralist Sirron Norris in collaboration with Groundswell starting in the 1940s, massive freeway construction and FHA loan availability enabled whites to leave the cities for the suburbs, while real estate, lending, and insurance practices along with national public housing policies confined communities of color to deteriorating inner cities. Since the 1980s, communities of color have experienced displacement from their homes in the cities due to capital investment strategies that market refurbished housing to the middle classes.

GROUNDSWELL will design and produce the AoS exhibits and will collaborate with the following partners to produce the AoL exhibits:

Other partners may include the following organizations:

GROUNDSWELL will partner with a network of organizations and civic institutions to host a series of community building events, which will link education to action. Through structured conversations and workshops, literary readings and film screenings, guided tours and school field trips, AoS/AoL will create multiple forums for youth and other community members to connect with community activists. The project will merge critical thinking with civic engagement through an interactive website linked to partner organizations and other resources so users can join activist efforts.

The target audience for the exhibit will be middle, high school, and community college students. We will partner with summer school programs and youth development organizations to achieve this goal. The audience will also include the broader communities residing and working in neighborhoods where struggles are taking place.

Outcomes:
Youth and other community members throughout the region will be able to:
• investigate local and national struggles over place and race;
• join with local organizations currently working on these issues;
• gain access to educational institutions in order to advance learning and civic engagement.

Curator Greg Dreicer conceived and researched another project “Architecture of Segregation,” which inspired AoS/AoL. We draw from his vision, concepts, and proposal in our work. 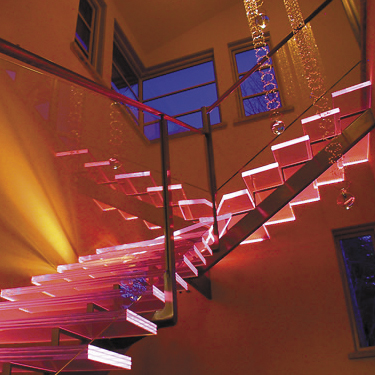 The hands-on exhibit will present a number of core lessons in stair design: mechanics; safety; and materials. It will also explore stairway shapes and external adornments. As it examines how body mechanics intersect with stair mechanics, the exhibit will address accessibility issues (alternatives for people with disabilities, such as escalators, elevators, and ramps). Mounted on a table 4' by 8' in diameter, the multi-level exhibit will measure approximately five feet from the floor to its highest point. It will be accessible to all, including people who use wheelchairs. Participants will be able to move around it, interacting with it from each of its four sides. The lower levels will serve as a platform for the hands-on activities and a series of laminated pull-out cards offering visuals and text of stairways in history, myth, and literature. Models of a variety of classic stairways will climb from one level to the next.