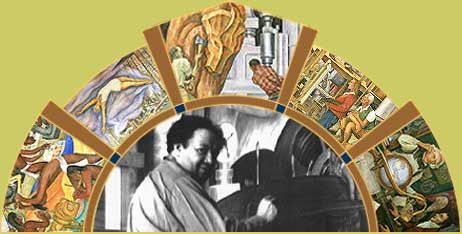 Diego Rivera’s The Marriage of the Artistic Expression of the North and of the South on This Continent, more commonly known as Pan American Unity, is a mural he created in 1940 at the Golden Gate International Exposition (GGIE) on San Francisco’s Treasure Island.

The mural includes three self-portraits and a portrait of artist Frida Kahlo, his wife. It is a unique combination of an artist in his prime and a critical moment in world history brought together on a monumental scale. It is arguably the most important work of art created in the Bay Area.

The Diego Rivera Mural Project, sponsored by City College of San Francisco, has as its mission the return of the mural to the position of public importance and influence envisioned by its creator.

Learn More About the Mural Project

Since 2017, the City College of San Francisco and the San Francisco Museum of Modern Art have worked in partnership to conserve the Pan American Unity mural and create opportunities for public art education. In 2021, the mural went on view at SFMOMA in the museum’s free-to-the-public Roberts Family Gallery on Floor 1. The mural will return to CCSF in 2023.

SFMOMA and CCSF are two of the city’s most enduring institutions in the public interest, and the transformative power of art and education come together in this visionary presentation of Rivera’s mural.

A comprehensive program of conservation, public education, and CCSF student internships accompany the exhibition of the work.

Pan American Unity is temporarily relocated to the museum’s free, un-ticketed space – the Roberts Family Gallery – that provides unrestricted access to view the mural and also provides for sidewalk viewing.

The loan of the mural is temporary, as outlined between a binding document between the College and the Museum, and will be returned to the College after the exhibit concludes. Additionally, the costs of the mural’s relocation and conservation are being covered entirely by the SFMOMA.

Students in the CCSF Student Docent Program collaborate to research and present original, informative and engaging interpretations of the mural. Below you will find docent bios and personal statements.

ALEJANDRA CADENA-PEREZ is a filmmaker and a multimedia artist with a professional theatrical dance background. She works primarily in film and video, comprising short documentaries, video installations, semi-autobiographical vignettes, and meditations on various recurring subjects. Her work is diverse, but common themes include nature, body in motion, and the female presence. She holds an M.F.A., L.L.M., and an M.B.A. She is Mexican, Canadian, and American. She is a runner and currently lives in San Francisco with her husband.

LELAND JUNG has a bachelor’s degree from U.C. Berkeley and a master’s in Traditional Chinese Medicine.  He has worked in the computer field and has been a vegan chef. At CCSF, he has recently completed a Multimedia Content Creation for the Internet Certificate of Achievement and a certificate in and Audio and Video for the Web. He has been studying art, creative writing, poetry, acting, and digital multimedia content.

BOB KEITEL: At CCSF, one can see me as the gray-haired older student whose dreams have come true. However, I am reinventing myself as I continue to attend City College of San Francisco. Through strengthening my competencies in library research and art studio/history, I imagine entering a third stage of my career. I have my dream job being a CCSF Student docent for the Diego Rivera Pan-American Unity temporarily located at the SFMOMA. Weekly, I engage museum patrons at SFMOMA as the view the recently restored the Rivera mural. I offer help and try to provide information about themes, personalities, and fresco processes. Many of the patrons form a mutual learning process with me.

LUCY SU is passionate about the field of interdisciplinary arts with interests ranging in visual arts, performing arts, and literature. She is a CCSF Student Docent for Diego River's Pan American Unity Mural. Some of her hobbies are writing, video editing, and playing sports and chess. Besides being captivated by her long list of interests and hobbies, her long-term goals are to achieve a bachelor's degree, build a successful career in a creative role, travel the world to learn about different cultures and meet new people, and maybe even work towards achieving a Ph.D in the future.

Alexandra Cadena-Perez presents on three journeys: that of the artist Diego Rivera, the mural itself, and the journey within the mural.

This video is an introduction video for a series of short video talking about the City College of San Francisco's Diego Rivera's Pan American Mural and the Surrealism Movement. There are five videos and this is the first video.

This video is part two of a series of short videos about the City College of San Francisco Diego Rivera's Pan American Mural and the Surrealism Movement. There are six videos and this is the second video. The mural is compared to a Diego Rivera Print, Communicating Vessels, 1938, based on an essay with the same name written by Andre Breton, a co-founder of the Surrealism Movement.

This video is the third video in a series of six short videos about the City College of San Francisco Diego Rivera's Pan American Mural and the Surrealism Movement. This video discusses the mural and a manifesto Diego Rivera and Andre Breton co-signed in 1938, the Manifesto for an Independent Revolutionary Art. It is believed Leon Trotsky and Breton wrote the Manifesto. The video also looks at Charlie Chaplin's The Great Dictator movie, Sergei M. Eisenstein's Battleship Potemkin movie, and Rivera's Open Air School print.

This video is the fourth video in a series of six short videos about the City College of San Francisco Diego Rivera's Pan American Mural and the Surrealism Movement. This video tries to find out if the Yin Yang symbol is being used in the Mural and if Rivera is using the Yin Yang symbol as a secret message for the Surrealism Movement and Social Revolution.

This video is the fifth video in a series of six short videos about the City College of San Francisco Diego Rivera's Pan American Mural and the Surrealism Movement. This video discusses the use of the Tree of Life in the mural, Rivera''s painting - The Hands of Dr. Moore, and his print - Communicating Vessels.

Ms. Michaela Gonzales created this lecture with the support of Sophie Touzé, art historian at City College who is teaching a variety of courses such as Women through Art History and Latin American Art History among others. Together they leveraged an interactive tool called VoiceThread and Michaela created a lesson focusing on aspects of the Diego Rivera's Pan American Unity mural.

This lesson discusses deeply feminine characters in the mural such as Coatlicue the primordial goddess in the middle, the Indigenous Tehuantepec region woman referenced in Kahlo's dress code as well as real life persons such a Frida Kahlo herself and other characters such as the diver Helen Crlenkovich on the upper left.

We hope that you will enjoy this tremendously masterful work done by Ms. Gonzales.  It has been presented in college wide presentations and is continuously used in Ms. Touzé's ART 106 course  -  Latin American Art History and greatly enjoyed by her students.

You can watch the entire lesson (2 hours-long) or jump from slide to slide.

Here is a basic how-to video to teach you how to navigate VoiceThread.

ALEJANDRA CADENA-PEREZ is a filmmaker and a multimedia artist with a professional theatrical dance background. She works primarily in film and video, comprising short documentaries, video installations, semi-autobiographical vignettes, and meditations on various recurring subjects. Her work is diverse, but common themes include nature, body in motion, and the female presence. She holds an M.F.A., L.L.M., and an M.B.A. She is Mexican, Canadian, and American. She is a runner and currently lives in San Francisco with her husband.

LILIYA ZAKHAROVA is a graphic designer and entrepreneur from Moscow, Russia. She studied Arts Market at Kingston University London, UK, where she gained knowledge of art and design history. She continued to build up her skills at CCSF and has graduated with a certificate in Entrepreneurship and Visual Media Design in Spring 2021. She is passionate about the ways the design is used in order to organize and communicate various information through the balance of imagery and text. Liliya is an avid traveler, she also enjoys rock-climbing, skiing, and tennis.

VISIT
Starting June 28, 2021, the mural will be on display at SFMOMA in the museum’s free-to-the-public Roberts Family Gallery on Floor 1. The display of the mural at SFMOMA is temporary; it will return to City College after the exhibit concludes.

DONATE
Donations to support the mural and mural projects are gratefully accepted. Please go to The Foundation of City College of San Francisco and select “Diego Rivera Mural Conservation Fund” from the “Direct your donation to” pull-down menu.

"My mural will picture the fusion between the great past of the Latin American lands, as it is deeply rooted in the soil, and the high mechanical developments of the United States."
- Diego Rivera

The Creation of the Mural

At the invitation of noted architect Timothy Pflueger, Vice Chair, Fine Arts Committee, Diego Rivera came to San Francisco to participate in the Art in Action program as part of the GGIE, during which fairgoers were invited to watch artists create their works.

Rivera and his assistants began work in June 1940 and completed the mural in December, two months after the close of the Exposition. Over 30,000 visitors viewed the mural during a preview and a public viewing.

Pflueger, also a prominent local architect, was at the same time working to build the campus of San Francisco Junior College (now City College of San Francisco). Together he and Rivera agreed that the mural would be permanently displayed at a new Grand Library on the college’s campus, where Rivera would work in view of the public to triple the size of the mural.

However, due to the ban on non-essential construction during WWII and the unexpected death of Pflueger, the proposed Grand Library was never constructed. The mural was eventually installed in the lobby of the performing arts theater and made accessible to the public in 1961. The building was renamed the Diego Rivera Theater in honor of the artist in 1993. 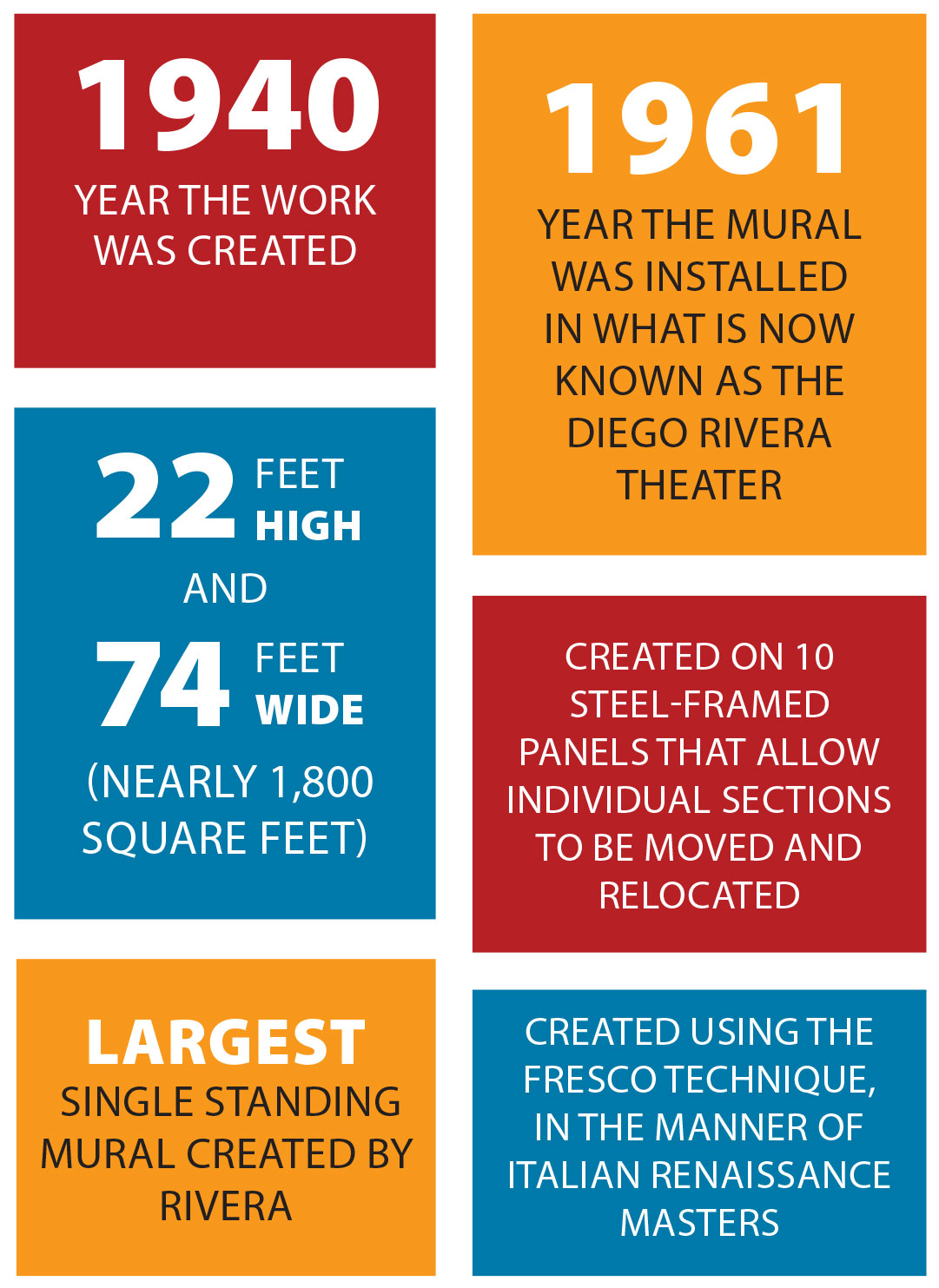 Make a Donation to Support the Mural Project

Donations to support the mural and mural projects are gratefully accepted. Send donations to:

The Foundation of City College of San Francisco

You may also donate online. Go to The Foundation of City College of San Francisco and select “Diego Rivera Mural Conservation Fund” from the “Direct your donation to” pull-down menu.

The Foundation of City College of San Francisco is a tax-exempt nonprofit 501(c)3 organization. All gifts are tax-deductible as allowed by law. Tax identification number: 94-1682567.